Ages ago, I was a grad assistant for the late documentary film maker and teacher George C. Stoney, a genial Irish-American who taught an introductory lecture course simply called "Documentary Traditions."  It was really two courses; every fall he'd show films organized thematically, but every spring, he'd bring in guests every week, his friends in the biz to talk about their experiences and to show their work.  There was a certain rotation of people, obviously, since scheduling is not always so easy, but one regular was D.A. Pennebaker, famous chronicler of Bob Dylan's 1965 U.K tour and the Monterey Pop Festival, among many other great documentaries.  Sometime in about February or March of 93 -- I wasn't assisting George yet --  Pennebaker brought with him a rough cut of a film he was still working on about the Bill Clinton campaign.  Yep: about sixty students got to see The War Room before it was released and went on to be hailed as a classic (and made media darlings of James Carville and George Stephanapoulos).

The role of the grad assistant for the course was not too hard; it mainly consisted of grading journals and some papers at the end of the term, and if necessary, going to the filmmakers' places to pick up prints of film.  Sometimes that involved carrying the heavy, octagon-shaped metal cans holding reels of 35mm film. (Here's a pic:) 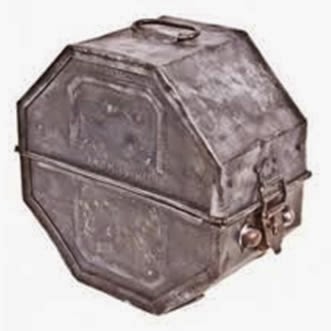 And so it often was for the assistant who went to Pennebaker-Hedgedus Films uptown.  He'd also bring stuff on video or 16mm, on occasion.

He brought a bunch of things to share the time I carried them cans.  He showed a short profile film about the quirky singer-songwriter Victoria Williams, whom I totally developed a crush on afterward. (Williams is the founder of the Sweet Relief fund for ailing musicians; Williams herself was diagnosed with MS, and indeed Pennebaker showed a video he made for a Williams tribute album that had been released to promote and support the fund.)  At Stoney's request, he showed (from them 35mm cans I carried) his great film whose title tells you what he captured, Original Cast Album: Company, made in 1970.  I'd never been a fan of Sondheim, but whatever respect I have for his work today stems from watching this fine cast (featuring the great Elaine Stritch struggling to get "Ladies Who Lunch," only to just strike gold the next day).

But the film I have carried with me since was the short that if memory serves was also on 35mm. Pennebaker and his wife Chris Hedgedus and his son Frazier had been for a many years going back over the footage shot for the 1967 Monterey Pop Festival.  (Eventually a lot of the stuff was released by Criterion Collection.)  In the late eighties, Pennebaker released two shorts that featured the entire sets of two of the most famous performances from the festival, Jimi Hendrix and Otis Redding.  The two had long been linked since the audio recordings had been compiled as a single LP back in the early seventies.   Pennebaker brought Shake! Otis at Monterey to class.  I told the students that they had to write in their journals that it was the greatest movie they saw all term.  There were more than a few great ones I saw in the class, but this was it.

I am always amazed at how in the early days of these festivals the camera crews were able to get great footage of the night-time performances when lighting was not always film-friendly (nor consistent).  Pennebaker uses the lights from in front of the stage, shooting from behind Redding at times, or shooting him from the side, creating these momentary silhouettes before the audience gets hit by the light.  He also has a few quick cuts up his sleeve, notably during Otis's ferocious version of the Stones' "Satisfaction" (whose famous riff the Stones recorded as Keith's version of the Memphis horns).  He also plays up the psychedelia, showing off the "coool" designs being projected on the stage behind drummer Al Jackson.

Pennebaker told a story that Redding's people didn't want him to play Monterey.  They saw it as a dumb hippie fest, and, well, they were right, but Otis apparently didn't care.  He just wanted to play and hang out and smoke a little weed and entertain what he called on stage "the Love Crowd."  He knew how to play to any audience, any size.  (He also used the Bay Area as the setting for his swan song, the contemplative "Dock of the Bay.")   And God, he played that crowd.

Redding sang five songs in about 18 minutes.  He opened with his punishing cover  of his idol Sam Cooke's "Shake," and over the first chorus, Pennebaker brings out the title credit: SHAKE!! He's got the crowd screaming.  None of the California acts -- northern or southern -- generate that kind of energy.  (The best acts were the outsiders, really: Janis of course, the Who, and Jimi, and even Eric Burdon, with his wild version of the Stones' "Paint it, Black" -- they all played with great energy and passion. Of course Paul and Artie didn't exactly shake things up.)   He then tells the crowd that a "good friend" of his "took" this song he recorded, "she took it..." he says breathlessly.  Is he breathless from the song he just sang, or from thinking about what Aretha Franklin did with his modest hit "Respect"?  Whatever the case, he says, "I'm still gonna do it anyway" -- it's a great performance, though you can't say he takes it fully back from Aretha.

He slows the tempo down for "I've Been Loving You Too Long," a pleading ballad that builds to a fabulous climax; here Otis stops several times, turning to Al Jackson and telling him, "play that part one more time" -- and the band does.  "one more time--  ONE MORE TIME -- and he moves with the short break, getting more and more outlandish, yes, heading into James Brown territory emotionally but remaining on Redding's turf.  and the camera is perfectly placed behind Redding but in front of Jackson, so you can't see Al's reaction, but you feel it -- thanks to the lights that keep coming and going out of your view by Redding's head-bobbing.  The bit with Jackson is the usual thing they do on this song, but it feels so damn fresh, as it surely was for the Monterey crowd.

After "Satisfaction," he takes on the standard that Sam Cooke also recorded, that Otis had resisted recording for a long time, but when he did, he took it to the stratosphere: "Try a Little Tenderness."  It's the one disappointment, the cameras had run out of film early in the song and magazines were being changed during most of it, so Pennebaker gives us a montage of the many young women the crews photographed during the festival. (You'll see a cute shot of Mama Cass Elliott early on.)  It's an interesting if perhaps sexist time capsule of what the scene was like.  Fortunately the cameras are back on just as Otis turns up the heat and Jackson picks up the tempo -- "GOT-ta GOT-ta GOT-ta have! Try a little TEN-derness...!" as Duck Dunn thumps his bass guitar and the unseen horns blast away. (Guitarist Steve Cropper -- who co-wrote "Dock of the Bay" with Redding -- can also be seen a lot in the film  Missing from the screen is the keyboard player, Booker T. Jones.  Those four men -- Jones, Jackson, Cropper, and Dunn -- were of course Booker T. and the MGs, the world's greatest backup band.)

We are quite fortunate to have a chronicler like Pennebaker, and I haven't spent enough time noting his ability to get such great close up shots and remain unobtrusive to the performers, or his interesting editing choices he's made in his films.  But if that's the case, it's because Otis has such charisma on the stage, that you are overwhelmed.

This is a so-so copy of the whole thing, but you can easily find most of the individual songs in better quality.  Or, just go pay the big bucks down to get the Criterion "Complete" Monterey Pop Festival 3-Disc set.  Shake! is worth it.


Posted by Talking2myselfagain at 9:12 PM