Film Friday: Juno and the Previa

In a discussion of Jason Reitman's 2007 film Juno, I decided to address, briefly, issues of class in the film.  And for me, that meant talking about this: 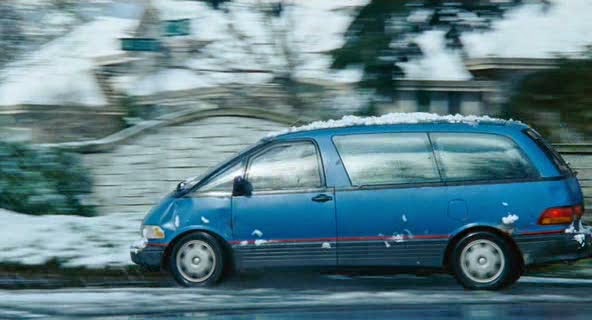 I always tell my writing students: you don't just drive a "car," you drive a _____, and you have to fill in that blank with at least the make(r) of your car.  Mercedes-Benz suggests one socioeconomic position; Yugo suggests another.  Likewise Maserati and Mustang.

When watching the film for a second time in a week, I began to reflect: when was the last year Toyota even sold Previas in the U.S. (or at least, that version of it)?  The answer: 1997.  Assuming Juno to be a contemporary film, that means that Juno's family has a car that's at least ten years old, and probably closer to fifteen.  That tells an audience much about the family's economic circumstances; the Previa looks out of place as it pulls in front of the "McMansion" (thanks, Dave Monahan, for that term) where the prospective adoptive parents of Juno's unborn child live.

While Juno's dad and stepmom run their own businesses, they are very small operations; they are really working-class, though the film is at some pains to give them a middle-class sensibility, which is to be expected in most American films.  They seem a lot more articulate and witty than, say, working-class characters in British films (even those written by the Angry Young Men of the fifties and sixties). We sympathize with them, especially as we begin to get to know them apart from Juno's perspective.  (At first, Brenda, her stepmom, is a figure of ridicule, but when Bren confronts the sonogram tech who speaks condescendingly about Juno's situation, she pulls no punches in defending her "dumbass stepdaughter" and even goes so far as to suggest the tech go back to school and get a "real job.")

They are contrasted with Mark and Vanessa, the clean-cut yuppie couple whose house is meticulously ordered in a way that is vaguely reminiscent of the Burnham home in American Beauty.   We are supposed to feel a little superior to them, despite their wealth.  They are eager and mostly serious, where Juno and her dad are not.  When Vanessa asks, "did you ever feel like you were born for something," Juno's dad mock-agrees, saying "cleaning H-VACs."  He's got a level of class-consciousness that few of his position ever really get, or rather, he knows that life is pretty much a crapshoot and that you do what you can with the cards you get.

As the film goes on, we begin to feel less and less dismissive of Vanessa, and we have to re-think our opinions of Mark when he decides he's not ready to be a parent and wants to leave Vanessa and try once again to make it as a "real" musician instead of the hack-jingle writer he's become in order to pay for the McMansion.  (Of course the film posits the "really cool" music Juno and Mark both like, along with the equally cool soundtrack, against the jingle work, without acknowledging that a pop song is in and of itself an advertisement, one that says, "BUY THIS RECORD! GO SEE THIS ACT!" This irony is missed.)

But again, since the film is about Juno -- hence the title -- and much of the narrative is her point of view, we don't really pay much attention to the economics of single motherhood that Vanessa is about to embark upon, as she agrees to continue with the adoption without Mark.  The film doesn't address the question of Vanessa's financial circumstances; we don't know if she'll have to sell the house and move into Juno's neighborhood, but it seems unlikely.  There's no consideration of the economic impact a separation is going to cause -- divorce is expensive and only the lawyers profit by it.   Will she have a nanny, or daycare, or will she work from her home? None of that is relevant to the film's ending, because once Juno gives up the baby,  she more or less returns to the concerns of being 16, even as she has learned quite a lot about life and relationships during the course of the pregnancy.

Juno could have tried harder to give us some insights into class, and in fact there are those subtle signs.  But its script and direction have other concerns. Maybe that's why we don't see the Previa at the end, after its served its final purpose of getting Juno to the hospital in time.


Posted by Talking2myselfagain at 8:47 PM